For the first event of the new EXPO Series of new music events in the JdP, we welcome Marco Donnarumma for a performance of his works and a lecture on robotics, biotechnology and electroacoustic music, and Luke Nickel who will present a lecture on notation, re-performance, loss of fidelity and memory.

A unique presence across contemporary performance and media art, Marco Donnarumma distinguishes himself by his use of emerging technology to deliver artworks that are at once intimate and powerful, oneiric and uncompromising, sensual and confrontational. Working with biotechnology, biophysical sensing, as well as artificial intelligence (AI) and neurorobotics, Donnarumma expresses the chimerical nature of the body with a new and unsettling intensity. He is renown for his focus on sound, whose physicality and depth he exploits to create experiences of instability, awe, shock and entrainment.

Since the early 2000s, Donnarumma has been developing a deeply transdisciplinary expertise, drawing equally from live art, music, biological science, computation and cultural studies. He holds a Ph.D. in performing arts, computing and body theory from Goldsmiths, University of London, and is currently a Research Fellow at the Berlin University of the Arts in partnership with the Neurorobotics Research Lab Berlin. His newest performance for human dancers and AI prostheses, Alia: Zǔ tài, was recently awarded the Goethe Institut’s International Coproduction Fund, and will be co-produced in 2018 by CTM Festival (Berlin) and Chronus Art Center (Shanghai) during a year of exchange across Germany and China.

Writing regularly on body, music, technology and performance studies, Donnarumma is published by MIT Press, Oxford University Press, Routledge and Springer. His artworks received several awards, including the second prize (Award of Distinction) in Sound Art at the Prix Ars Electronica (2017), the first prize at the Cynetart Award for Computer Based Art (2014), the second prize at TransitioMX Award for New Media Art (2013), and the first prize at the Guthman New Musical Instrument Competition (2012), among others. Articles and interviews featuring his work appear on BBC, The WIRE, Forbes, Reuters, ARTE.TV, Wired, IEEE, RTVE, El Pais, CreativeApplications, ResonanceFM and The Creators Project.

Luke Nickel is an award-winning Canadian interdisciplinary artist and researcher currently living in Bristol, UK. He has recently finished a PhD at Bath Spa University under the direction of James Saunders. His work, which began in the field of music composition, now investigates notions of notation, re-performance, loss of fidelity, and memory. He has worked with ensembles such as EXAUDI, the Bozzini Quartet, and the Winnipeg Symphony Orchestra, and collaborated with galleries and organizations such as the Panoply Performance Laboratory (Brooklyn, NYC), G39 (Cardiff), and the Arnolfini (Bristol). Additionally, he has received support from organizations such as the Social Sciences and Humanities Research Council of Canada, the Canada Council for the Arts, the Manitoba Arts Council and Sound & Music.

Luke currently has two main strands of work. The first is centered around memory and the process of transmitting musical scores. In this practice, he aims to remove the concrete document of the score and relocate it to the unstable domain of the human memory. He does this by communicating all the parameters found in traditional scores in ephemeral means such as unrecorded conversations or temporary audio files. By rendering the score unstable, he allows forgettings, mis-rememberings, and transformations to permeate the very fabric of the musical material. In this strand, Luke works mostly with solo musicians and chamber ensembles such as EXAUDI, the Bozzini Quartet, Architek, Viva Voce, Mira Benjamin, Isaiah Ceccarelli, and Michael Baldwin. Examples can be heard the scores Made of My Mother’s Cravings and [factory].

The second strand of Luke’s work is focused on the notion of text as sound — or sound in text. In this stream of work Luke is developing spoken vocal quartets that examine traditionally musical qualities (such as proportion, silence, and density) while at the same time treating the text itself musically. Oftentimes the subject of the text is, in itself, musical. So far these works have taken the format of performances, installations, objects, and writings and have been presented at the Arnolfini Gallery, Bang the Bore concert series, and Bath Spa University. Examples can be heard in the pieces String Quartet #1 and White Fang Field Recording.

Luke is also an active curator, and currently co-directs the Cluster: New Music + Integrated Arts Festival in Winnipeg, MB, Canada. Cluster Festival is now in its seventh year, and has featured hundreds of interdisciplinary artists from across the world in innovative forms of presentation. 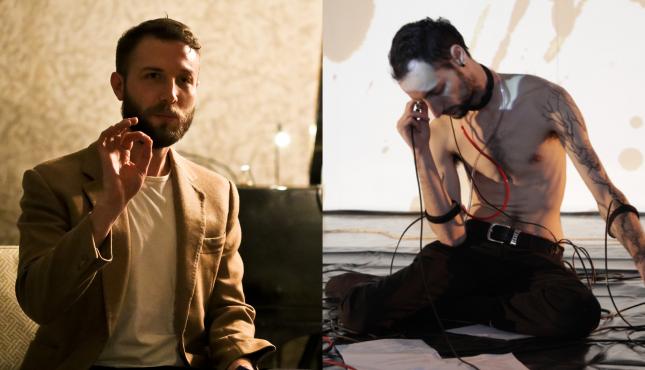