This special day of music-making and discussion is devoted to the music of one of the world’s greatest living composers, Valentin Sylvestrov. The culmination of the unique Ukrainian Culture Weeks 2022 festival taking place in Oxford on consecutive evenings starting on September 28, this is the first time Sylvestrov has visited the JdP, a venue which has regularly programmed his work since pianist Jonathan Powell became featured artist ten years ago.

Valentin Sylvestrov, emerged in a Soviet context as one of the most original and revered composers that include Arvo Pärt, Alfred Schnittke, Sofia Gubaidulina and Gija Kancheli. Sylvestrov was noted for his daringly modernist works in 1960s before performances of his music in the Soviet Union were banned when he walked out of a Union of Soviet Composers’ meeting in 1968, in protest of the Soviet Union’s invasion of Czechoslovakia that year. Working in complete isolation in Kyiv in the mid-70s led to a complete transformation of his music, typified by his remarkable song cycle, Silent Songs (1977), which was composed for private performance.

The concert focusses on Sylvestrov’s heartrendingly beautiful music for voice and piano. It not only represents a unique response to our present day situation, but draws on Ukraine’s cultural heritage and on associations of lyrical songs drawn from the early nineteenth century. In many of these Ukrainian language songs, the singer is instructed to sing so quietly that it should seem to emerge out of the sound of the piano, creating a special quality that distances these songs from traditional art music.

The subsequent talk at 2pm is a rare opportunity to hear Sylvestrov talk about his work (and potentially even give illustrations of his music on the piano). Martyn Harry has had a long association with Valentin Sylvestrov’s work. As Executive Producer, New Music for Sony Classical in the early nineties, he was responsible for the first Western CD recordings of Sylvestrov’s Fifth Symphony and Postludium for piano and orchestra. He also wrote a significant article on Sylvestrov’s work for ‘Gramophone’ magazine ten years later. As well as being St Hilda’s music lecturer and the artistic director of the JdP, Professor Harry is professor of composition at the Faculty of Music in Oxford. 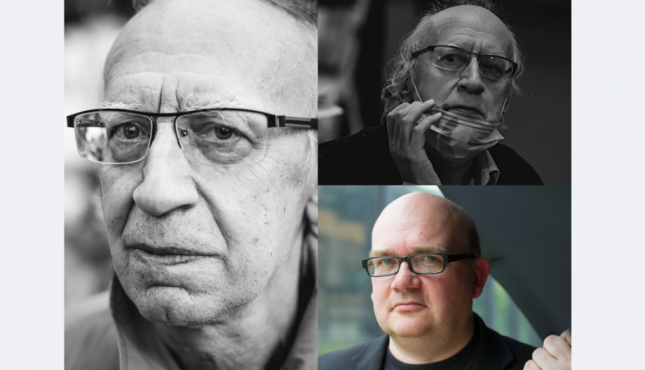