The Villiers present a programme featuring works by Mozart, Frederick Delius, and Ethel Smyth. Opening the concert is Mozart’s sublime Quartet in E-flat Major, written with a rich exploration of chromaticism and dissonant harmonies. At the centre of “Discovering Delius” is the complete version of Delius’s first string quartet. Until recently, only the two final movements of the work were known to have survived. In 2019, the other two missing movements appeared for sale at auction and were purchased by the Delius Trust. These movements were prepared in first edition by Prof. Daniel Grimley, and the Villiers Quartet perform the work in its entirety at the JdP Music Building for this concert.

Alongside the Delius Quartet is a significant work by one of his contemporaries, Dame Ethel Smyth. Written in 1912, her Quartet in E minor reflects the work of an ambitious composer wanting to share her voice amidst a transformative time for women’s rights in the 20th Century.

Named after Villiers Street in London, the Villiers Quartet encompasses the grand and iconic spirit of the extraordinary music tradition in Britain and has been praised for “exquisite ensemble playing” (Seen & Heard International), and their absolute “commitment and virtuosity” (The Sunday Times). The Villiers Quartet is the Quartet-in-Residence at the Jacqueline Du Pré Music Building at St. Hilda’s College, Oxford University. Hailed as “Champions of British Music” (The Observer), the Villiers Quartet has become one of the most recognised quartets in the UK for the performance of British music, releasing acclaimed recordings of works by Elgar, Delius, Peter Racine Fricker, William Sterndale Bennett, David Matthews, William Alwyn and Kuljit Bhamra, MBE. In 2020 they gave the world premiere of the complete 1888 Delius string quartet, featuring movements in their original versions uncovered by Professor Daniel Grimley from Oxford University. The VQ has been supported by the Delius Trust for their continued exploration of Delius.

In 2020 the Villiers Quartet initiated new digitally-based projects including VQ Discovery, an online course to study historical quartets in-depth whilst in lockdown; #VQCreate, mentoring secondary school students online to compose new music for string quartet; and From Home: VQ Commissions, commissioning new works from diverse British composers to celebrate the VQ’s 10th Anniversary season for 2021. These works were premiered at the JdP Music Building in the “Diversity and the British String Quartet” symposium led by Dr. Joanna Bullivant and Prof. Samantha Dieckmann.

The Villiers Quartet has been broadcast live on BBC Radio 3 from the Leamington International Quartet Series, and on NPO Radio 4 live from the Concertgebouw. They were featured on BBC’s  In Tune and also BBC One’s The Andrew Marr Show with pianist Alexis Ffrench and double bassist Leon Bosch. The VQ presented masterclasses in the UK and abroad at Oxford University, Duke University, Dartmouth College, University of Nottingham, Syracuse University, Cal State LA, Jacksonville University, and Indiana University South Bend. 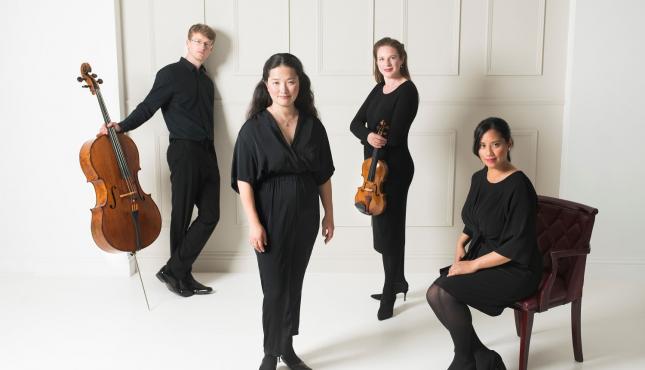